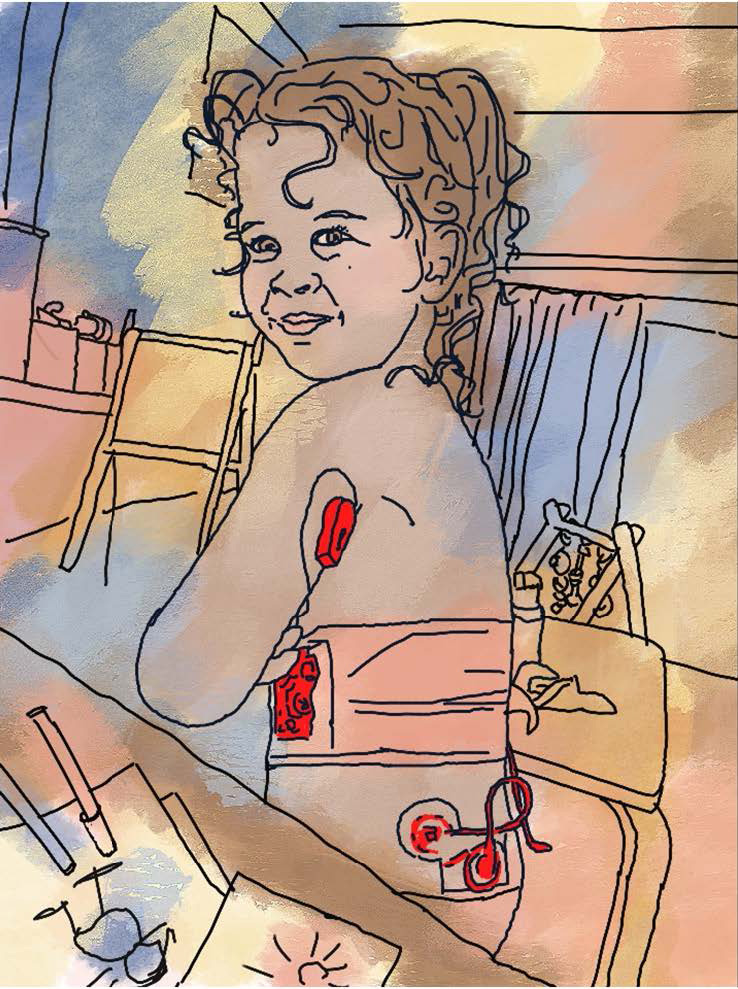 By Dr. Susan Wardell, Senior Lecturer, University of Otago
Acknowledgements: This article is based on research was funded by a Marsden ‘Fast Start’ Grant (PI: Susan Wardell, 2020-2023). More info on the overall project at crowdfundedcare.org. With massive thanks to Laura Starling, my Research Assistant, for conducting and transcribing many of these interviews. All artwork is copyright to Susan Wardell.
Tyler who is nine years old, wants to go on the trampoline. She interrupts her mum, Natalie, to ask if she can.
“What number are you, first?” Natalie queries in response. Tyler replies, having already checked the data.
“Ok, you can go” Natalie affirms.
Tyler promptly sits down and lifts up her t-shirt to unplug a device connected to her stomach amidst a host of tubes. “Put it on to charge!” her Mum reminds her. A few ‘beeps’ later, Tyler runs outside to join her sisters in the backyard; with another device attached to her body, continuing to send data back to Natalie’s cellphone, so that she can monitor her body chemistry from inside the house.
There are cyborg children among us; kids that do sports, go to school, play with friends… all whilst connected to sensors, transmitters, and pumps, that take samples, send data, administers drugs, and issue warnings if they are in danger.
If you think you know Diabetes in the 21st century… think again.
A new era of Type 1 Diabetes
There are two types of Diabetes, and they are quite different. Type 2 Diabetes, which is the more common, is a treatable and sometimes reversible condition where the body isn’t properly using insulin – a hormone needed for metabolising food. Type 2 Diabetes usually starts later in life, and is sometimes linked to lifestyle and diet. Type 1 Diabetes is an autoimmune condition, that often starts in childhood, and is lifelong and incurable. “It’s where your pancreas, which is something inside your body, doesn’t work. You need insulin to help you live. Because if you don’t have insulin you won’t live” as Tyler explains.
In New Zealand there are around 26,000 people with Type 1 Diabetes – just 10% of all Diabetics. This includes around 2,600 children and young people (aged 0-18); or approximately 1 in 500 school-aged children, according to another study.
Over the last few decades, advances in medical technology have turned Type 1 Diabetes from an acute and deadly condition, to a chronic, life-threatening but manageable one.” 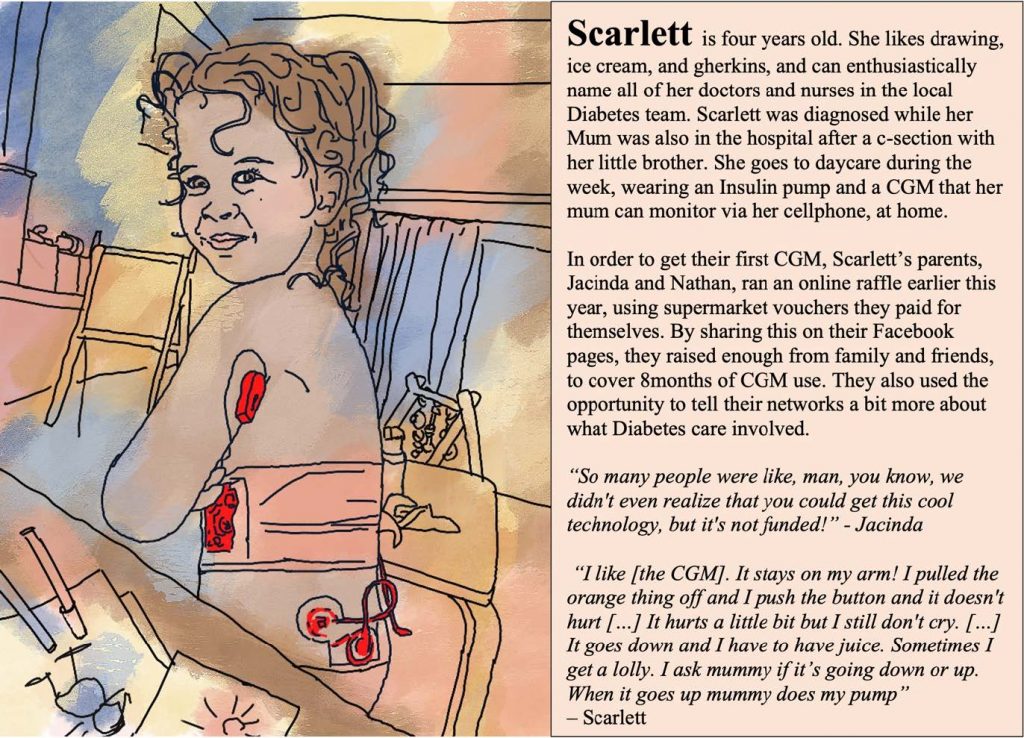 This technology includes needle kits allowing people to inject themselves with insulin multiple times a day, but also insulin pumps, which are computerised devices that worn on the stomach and can be programmed to deliver small doses of insulin directly into the body instead. It also includes Continuous Glucose Monitors (CGMs), a device taking over from “finger pricking” blood tests, but also going far beyond these. CGMs involve a sensor – typically attached to the upper arm, stomach, thigh, or sometimes back – with a small tube going under the skin. This checks glucose levels via interstitial fluid, every few seconds – turning the body into data, showing trends, making predictions. The transmitter part can give instructions directly to the insulin pump, or send the data continuously to the a cellphone so that someone else can calculate how much insulin to inject, and keep a look out for dangerous highs and lows. Daycare and teachers can follow along while kids play, healthcare professionals can receive an accurate and detailed summary, parents can check on their kids levels even while they’re at school across town, or doing things that burn glucose quickly – like, say, jumping on a trampoline. In the middle of the night, the monitor can wake them with an alarm if the blood glucose levels are skewing dangerously – allowing them to intervene before the child slips into a diabetic coma as they sleep. A fear all too real, and known as “dead in bed” syndrome.
The equipment is amazing – but it all costs money, and not every family of a kid whose “tummy is broken” – as 4-year old Scarlett explains her Diabetes to mean – can afford the ongoing costs to “fix” it.
Australia already offers public funding for pumps and CGMs – as in fact, do “all other Western countries” as Paediatric endocrinologist Dr Ben Wheeler has stated. But in New Zealand, while insulin pumps are funded for some people, depending on certain criteria, there is no funding for any type or brand glucose monitor, whose expensive sensors need to be replaced every 10-14 days. 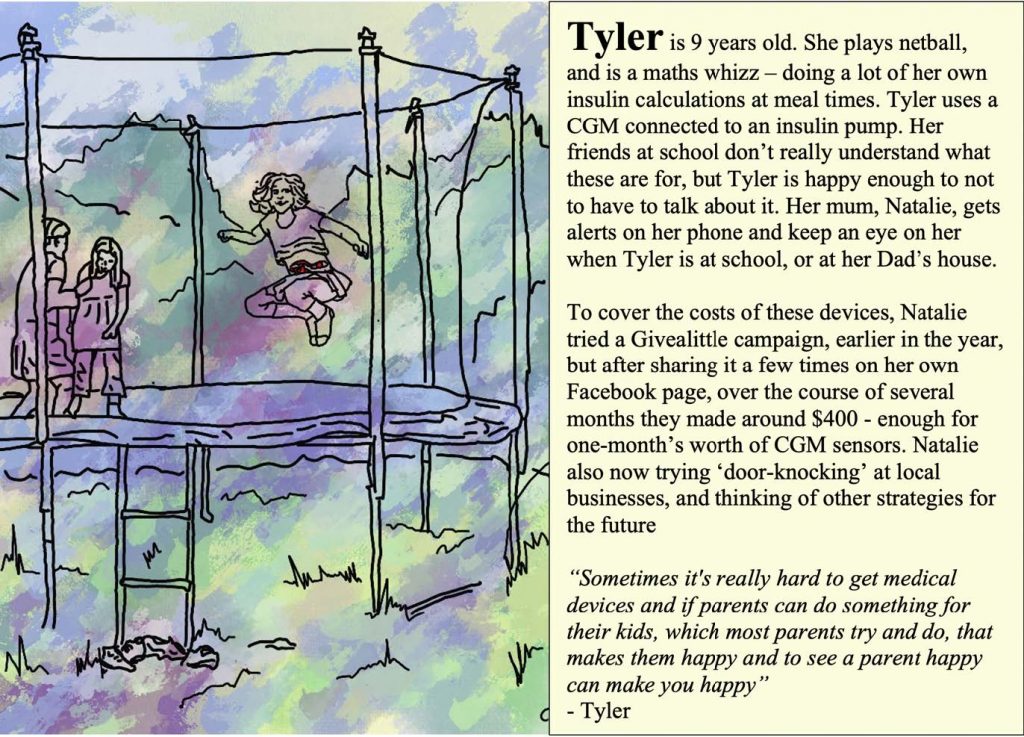 What life looks like without
Life with all of these devices can be complicated. But life without them is harder. Without the CGM, kids need finger pricking blood tests six, ten, or even more times a day. They are watched closely; interrupted at school, at play, for testing; woken in the night for more of the same. Their fingers become sore and sometimes even infected, as do the sites where they take insulin injections around every mealtime, straight into their stomach. Older children learn to do many of these things for themselves. Younger children, who don’t fully understand, or who are sick of being pincushions, sometimes need to be held still while crying or screaming, so an adult can do the things that keep them alive. “It hurts us to hurt her” as Apryl, the mother of 5yo Addison, shared. Parents deal with complex mathematical equations at every meal, to know how much insulin to inject – trying to learn the science alongside the nuances of their child’s individual biology, knowing that glucose levels can shift on as slight a thing as the weather, or a child’s mood. Siblings and extended family help out often: “It really is a whole family challenge to keep someone well” as Rachel shared. But nights are more limited, and many parents have to wake up to every 2 hours, every night, to test blood sugar. Some parents quit their jobs to manage. “It’s really hard on your mental health […] I don’t know how I could work and like get up every two hours, and just be able to go back into the workplace and function really.”
Rachel has been doing this for seven years, since her son William was diagnosed at age 8: “When they are first diagnosed, you think your brain is full up and you can barely cope with what’s going on, and eventually after about 6 months you’ve realised you’ve learned enough to get through every day […] but it never goes away, and you’re never the same again. You never feel rested”. 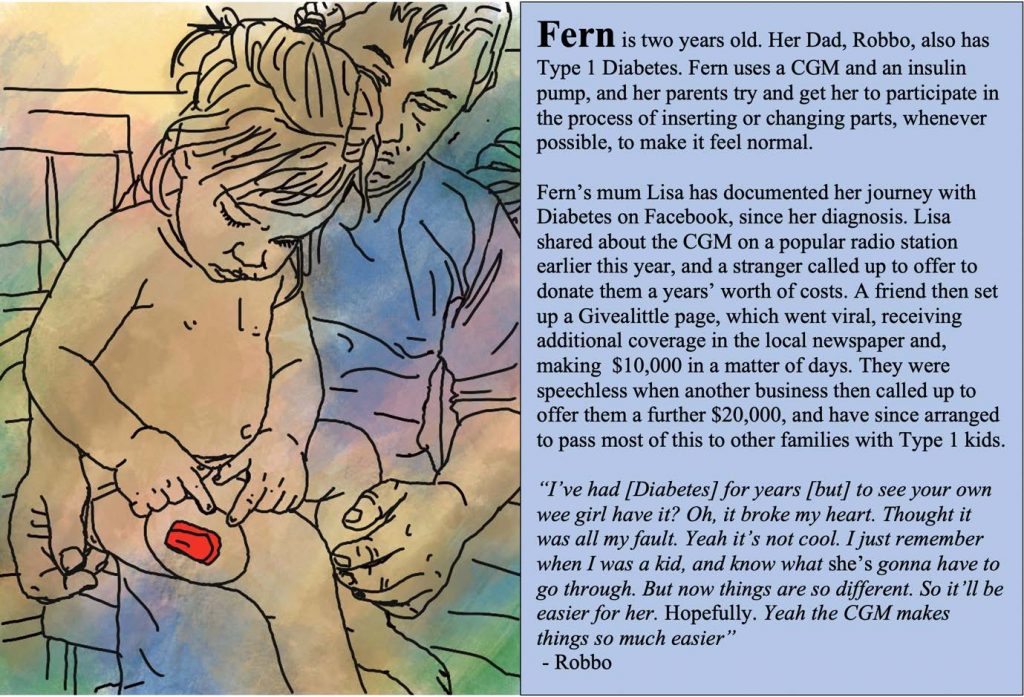 Families manage, of course. They “get on with it”. They don’t have a choice. But set against the relentlessness, and the high stakes, CGMs can be both “life-changing” and “life-saving”. This is not because the device removes the work of care-givers, but because the device collaborates with them, to offer more data, a clearer understanding, a better ability to predict and control levels (and thus avoid both hospitalisation and the many possible longer-term health complications that diabetes can cause) as well as less disruption and more freedom, for the kids themselves.
There’s good evidence – both anecdotal and scientific – for all of this. New Zealand’s continual refusal or delay to fund them, has turned a lot of Type 1 Diabetics and their families, into activists: questioning, as Rachel says “why is this so hard for people to access and live fairly and why are we not choosing those things for people when other countries are able to, and if we have got an enviable PHARMAC system, then where are these problems lying?”
How to ask nicely
In 2019, a petition for funding of CGMs in New Zealand was presented to Parliament. It was signed by nearly 28,000 people. After some COVID-related delays, a Select Committee finally heard the petition in June of this year. They sat through testimony about the benefits of CGM from Diabetes NZ representatives, for a paediatric endocrinologist, and from diabetics themselves. This included Eddie Writes, an 8 year old activist from Wellington, who was diagnosed with Diabetes two years ago, after nearly dying from diabetic ketoacidosis.
But the initial response made clear that nothing is happening in a rush. Funding could require $200million over 5 years, depending on the criteria set, and its slightly unusual for PHARMAC to fund devices used in the community, rather than directly by medical professionals. And of course there is a list of funding priorities that they must climb, when it is hard for the economic ‘cost-benefit’ model to fully capture not only the individual health outcomes, but the “social outcomes” of the CGM, as was admitted in the September response. 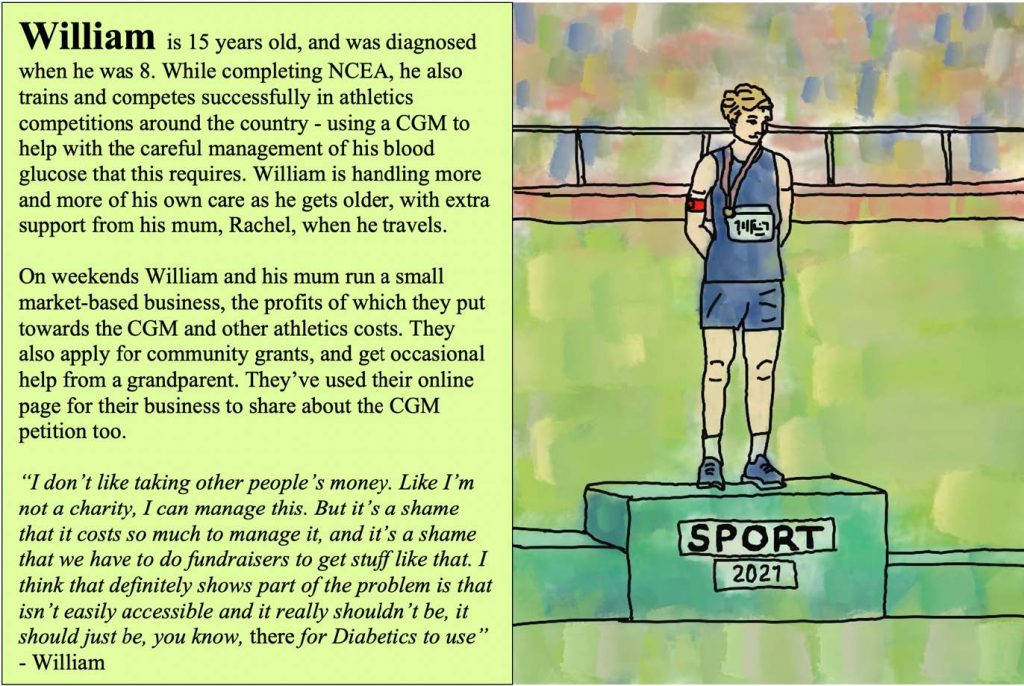 Without knowing if or when the device would ever be funded, parents have no choice but to scramble for ways to pay for a CGM themselves – slashing family budgets in other areas, selling possessions, cobbling together equipment donated by other Diabetes families on Facebook, as well as calling on relatives, running raffles, starting side-hustle businesses, setting up crowdfunding campaigns.
And here is the issue with most of these strategies: the cost is not a one-off, or a “luxury”. This is a lifelong disease, and alongside the many other costs of Diabetes, they must keep up the expensive yearly subscriptions for sensors if they want the benefits of a CGM – and the datafied, cyborg life that offers fewer hospitalisation, better life outcomes, and the ability to sleep at night.
Who’s a cyborg now?
It may sound dramatic to call these kids cyborgs, but it can be a useful way to think about health.
In 1985 a scholar called Donna Haraway published “A Cyborg Manifesto”, which emphasises the way our basic human lives are entangled with non-human objects, technologies, and systems – from the high tech, down to the everyday. Scholars have used this, and other work following, to the radical dependence and interdependence we all experience as humans.
Type 1 kids are a reminder of the same principle: that health is collaborative, entangled, and political; that even when something goes wrong inside an individual body, the actual implications of this depend on other people, systems, objects, and technologies. Lately this has come to include social media and crowdfunding technologies. 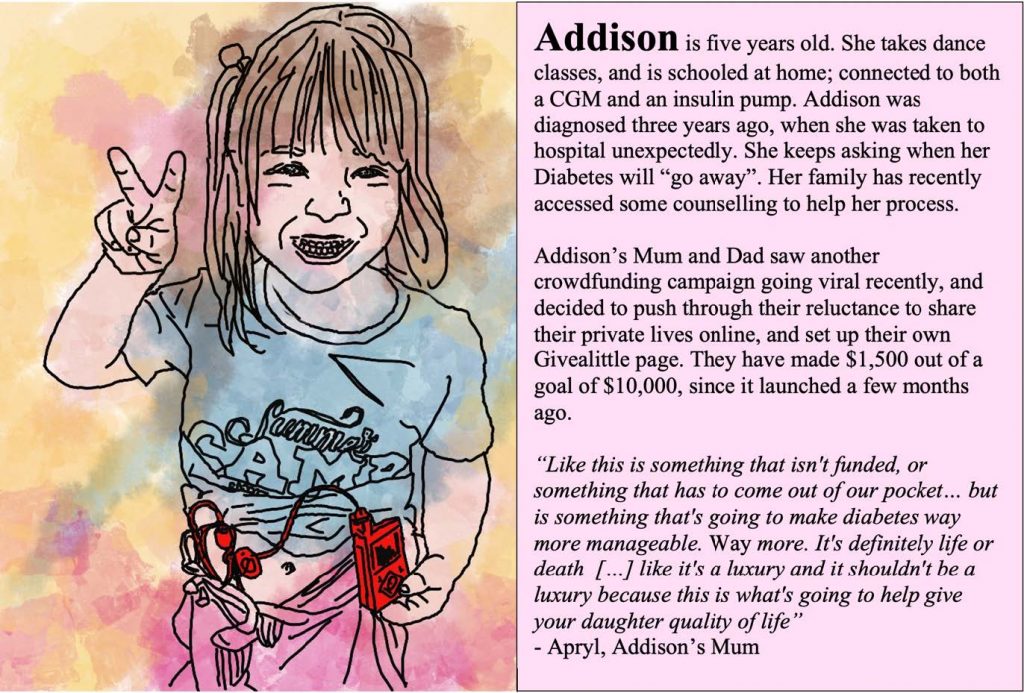 In the best of circumstances, private citizens’ efforts to bridge “gaps” in public funding with something like crowdfunding can create lots of warm fuzzies – with friends and strangers alike responding to pleas for help, with offers of money, resources, and support. At the worst of times, it simply re-entrenches other social inequalities, with fundraisers requiring time and skill, and having widely varied outcomes – typically relying on the assets within existing networks, luck, or the ability to tell a cute story. “It ends up becoming a game of privilege” as William, aged 15, told me sagely. Tyler was similarly aware, as she sat on the bed and talked about her CGM and pump, that “some kids in the world who have Diabetes don’t get the privilege to have all these devices”.
But should it be a privilege, or a right?
When we are dependent on something to live, unequal access to that thing is an issue of equality and justice. Recognising Aotearoa’s ‘cyborg’ kids, encourages to think about designing healthcare systems that don’t mean someone’s right to live, and live well, depends on Givealittle pages, raffle tickets, or market sales. We could fund the technology they need to survive, more reliably, through PHARMAC, and make sure everyone gets to go on the trampoline. 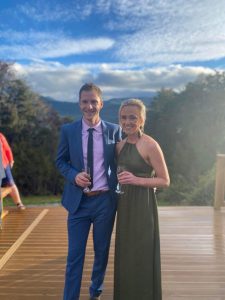 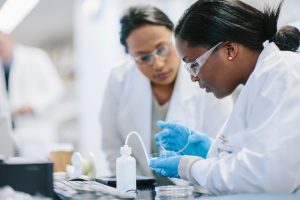